Shakespeare’s beloved comedy reveals the liberating power of love. As You Like It overthrows the traditional rules of romance, confuses gender roles, upends nature and politics and allows us to witness how bewildering and how utterly pleasurable life can be. Rosalind, one of  Shakespeare’s great women, joins a cast of brilliant comic characters lost in the delightful madness of the Forest of Arden. Artistic Director Doug Scholz-Carlson directs this play filled with some of Shakespeare’s best known songs.

Click here to hear a podcast with Director (Artistic Director) Doug Scholz-Carlson
Click here to listen to our Pre-Show Conversation before you get to the theater!

“Love is merely a madness”

It takes great courage to leap into love. Maybe that’s why we don’t leap; w
e fall. It trips us when we least expect it – at a wrestling match, near a goat herd or in the Forest of Arden. Love can strike suddenly and completely, and it doesn’t always involve the person you’d expected to fall for. Falling in love happens without our consent. However, giving yourself to another requires taking a leap of faith.

Check out our production photos in the slideshow below! 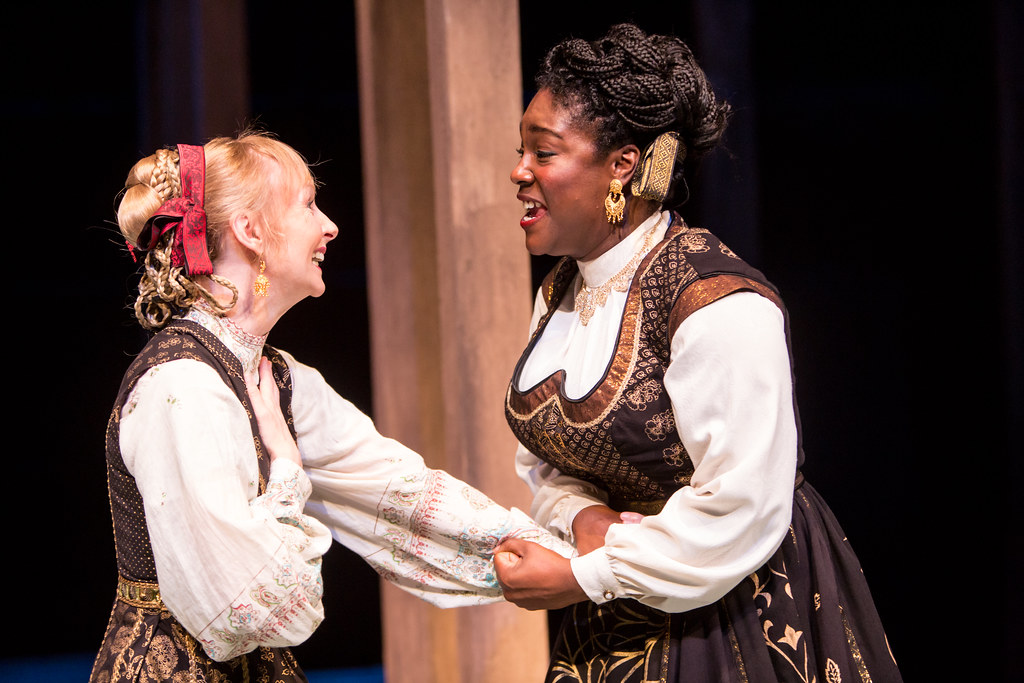 She’s back in a familiar play, but in a not-so-familiar role.

Tarah Flanagan with Robert Adelman Hancock in “As You Like It”

This summer at Great River Shakespeare Festival, Tarah Flanagan, who is in her tenth season with the festival, will be playing the leading lady Rosalind in As You Like It. Tarah has performed in the play a number of times throughout her performing career, but always in the roles of Celia or Phoebe; this summer will be the first time she steps into the role of Rosalind.

“I really enjoy a couple of things about playing Rosalind,” she said. “She has some really spectacular language. It’s gymnastic and athletic and imaginative. Rosalind is one of Shakespeare’s most brilliant characters. So that’s really fun to delve into and try to wrap my mind around.”

But what is really fascinating about Rosalind, according to Tarah, is her relationship with other characters. “The female relationships in this play are so powerful and wonderful, especially the relationship between Celia and Rosalind,” she said. “That relationship is unique to Shakespeare and many of the plays I’ve worked on. They are so devoted to each other–they really are soulmates, in a lot of ways.”

Because she has peripherally observed Rosalind’s character in her other performances, Tarah is hoping to bring another dimension to the character that many actresses often overlook. “Very often, we see Rosalind as somebody who doesn’t need anything from Orlando. I feel like the discussion gets limited to everything Orlando needs to learn from Rosalind about what real love is. All of that is really important, but Doug (Scholz-Carlson, the festival’s artistic director) and I have been looking at the other side. In other words, what does she need?”

Tarah’s answer to that question was as surprising as it was touching. “We encounter Rosalind at the beginning of the play with her world turned upside down: her status is completely reversed, her father is gone, her uncle is repressing her,” Tarah said. “She already has the experience of no ‘happily ever after,’ of the fairy tale not being real. Sometimes, when you have these terrible life experiences, it can make you very fearful and distrustful of others. She has a hard time believing that Celia will never abandon her. And with Orlando, she just can’t quite believe in him. The thing she learns from him in the end is that if you want love in your life, at a certain point, you have to trust. You have to just take the risk, and believe, and make that leap of faith.”

When an actress as brilliant and seasoned as Tarah talks about what it’s like to play a role, it’s easy to forget how difficult it is. “Shakespeare requires all of you,” she confessed. “All of your brain, all of your heart, all of your physicality.”

But, she reminded, “As human beings, we think we want things made easy for us, but what we actually enjoy is when things are very hard. So it is a very challenging role, but I love it. There’s nothing I don’t like about playing Rosalind.”
As You Like It opens on Friday, June 24 at 7:30 P.M. and runs through Sunday, July 31. Tickets are available at www.grsf.org and 507-474-7900.