Inspired by Banvard’s Folly: Thirteen Tales of People Who Didn’t Change the World

In the 1850’s John Banvard did more to elevate fine arts than any single American artist before him. John Banvard was the most famous living painter in the world and the first millionaire artist, world-renowned for his three-mile long moving panorama celebrating the majesty of the Mighty Mississippi. Today an examination of reference books will not turn up a single mention of his name. John Banvard, the greatest artist of his time, has been utterly obliterated by history. The new musical Georama tells his story.

I had the good fortune of meeting West Hyler, co-author  of Georama when he and I shared an audition space at the Utah Shakespeare Festival in August, 2011.  We had both been invited to see the work at USF that season through the Festival’s “REACH” program, in which working Artistic Directors, casting directors, directors, and producers travel to Cedar City, the Festival’s home for several days of playgoing and auditioning. I’d been told that there were many REACH program participants the days I’d be at the Festival and that program leaders needed us to double up in order to maintain some efficiency and make it possible for all the actors wanting to audition and interview to be seen.  When I asked my USF contact with whom I’d be sharing the room, all she knew was West’s name — and that he was a New York-based director.
“Oh, swell. . .” I thought to myself, “a New York director.”  Assuming (wrongly, as it turned out), that I’d be spending time with the kind of fast-paced, hard-edged, no-nonsense, impersonal sort of person you often hear about or meet in the New York City world of theatre, I was trepidatious.  I prefer a more relaxed and personal room — a friendly room, as it were — in which actors can feel at ease and therefore, in my experience, are able to do their best work.  I feared that West, who was with Dodgers Theatricals at the time and who had been Des McAnuf’s assistant on the San Diego and Broadway productions of the Tony Award-winning musical, Jersey Boys and now supervised replacement casting and direction of the book scenes for JBs around the world would probably be of that stereotyped ilk.  So I called my friends who were involved with Jersey Boys and asked what they thought.  In return, I received unanimous, resounding raves for West — as a person and a director — and was repeatedly assured that he and I would get along famously.  Which, as it turned out, we did.
I mentioned to West as we were getting acquainted on our first day together that in addition to my free-lance directing work, I was a founding Producing Director and (then) Artistic Director of a fairly new Shakespeare festival located in a town on the Mississippi River in Southeastern Minnesota. He perked up immediately and mentioned that he happened to be working on a new musical that was set on the Mississippi.  My interest was immediately piqued, and on our second or third day of viewing auditions, we were able to find time for a morning drive to Cedar Breaks National Monument, just outside and above Cedar City, during which West related the story of Georama and played a five-song demo CD on the sound system in my car.  I was immediately smitten by John Banvard’s story and the Americana music that West and his writing partners, Matt Schatz and Jack Herrick, were creating, and told West that I’d love to find a way to get the three of them to Winona the following summer for a weeklong workshop of Georama that could culminate in a public sharing of the material.
And so the Great River Shakespeare Festival’s role in helping to develop a brand new American musical came to pass.  We agreed on dates, asked GRSF actors Doug Scholz-Carlson, Stephanie Lambourn, Jonathan Gillard Daly, and Michael Fitzpatrick to take on the play’s four roles; Chris Sadler, who was very experienced with shepherding new work agreed to stage manage the workshop; Andrew Carlson volunteered to lead the feedback session after public sharing, and Nicholas Throop, our Development Intern and an accomplished pianist, became the all-around assistant for the workshop, accompanying rehearsals, copying music, and being part of the band on the night of the public sharing.  My hope had been to move Georama from the 2012 workshop into our 2013 10th Anniversary season, but we weren’t able to make that happen.
West, Matt, and Jack took Georama back into development following their week in Winona (a week during which, thanks to the generosity of local supporters they got to kayak and canoe on the Mississippi River, each for the very first time), and I took the script and score to my friends Steve Woolf (Artistic Director) and Seth Gordon (Associate Artistic Director) at Repertory Theatre of St. Louis, and urged them to consider Georama as part of their “Ignite” new play series.  I also made sure that West and Steve met in person on one of Steve’s many trips to New York City.  Not long after those introductions were made, the Rep hosted Georama in its newly revised form as part of its 2015 “Ignite” program and from there, thanks to very positive response, have moved it into its current 2015-16 Studio Theatre season through which it will have its regional premiere in late January, 2016. (Coming right up!)  The production will feature set design — including the design and painting of the essential georama set piece itself — by Scott Neale, who designed sets at GRSF for our 4th and 5th seasons, with costumes by Margaret E. Weedon, GRSF’s resident costume designer (and the costume designer for our 2016 summer season production).
I couldn’t be happier that Georama will return to the GRSF stage during our 2016 season and that I’ve been given the opportunity to direct it.  The route to developing a new play is long and arduous.  The path with Georama has been relatively short by comparison with many others.  It’s our hope that our production of this stirring and unique, only-in-America- rags-to-riches-to-rags story about an unknown but remarkable American artist will not only delight GRSF audiences from June to August, but that we’ll help provide a stepping stone for the musical’s continued development and success across the country.

John Banvard’s life is a classic tale of rags to riches and back to rags. Banvard is credited for the invention of the “georama,” a moving panorama that was scrolled to show various scenes and accompanied by storytelling and music. Banvard’s famous georama depicted 2300 miles of the Mississippi River and the canvas itself was 3 miles long–it would have stretched between Perkins and Hyvee! Sadly, Banvard’s luck ran out when he began facing competition from imitators and invested his money into foolish ventures, including a castle he built for himself and his family commonly called “Banvard’s folly.” Despite his widespread popularity during his prime, he slipped into obscurity. Most of his paintings have been unable to be recovered today, although it is suspected that a section of the georama was found several years ago being used as insulation in a home.

The musical, which was workshopped here in Winona in 2012 but premiered in February at the Repertory Theatre of St. Louis, “illustrates an artist’s rise and fall and the choice he must make between the art he loves and the life he’s always longed for.” Our production stars Rob Hancock, in his GRSF debut, as John Banvard; Stephanie Lambourn as Elizabeth Goodnow; Michael Fitzpatrick as P.T. Barnum; Mark Murphy as Chapman, Pastor Goodnow, and the Queen of England; and Silas Sellnow, Ted Kitterman, and Ana Marcu as Musicians/Ensemble. The show will be 90 minutes long with no intermission. 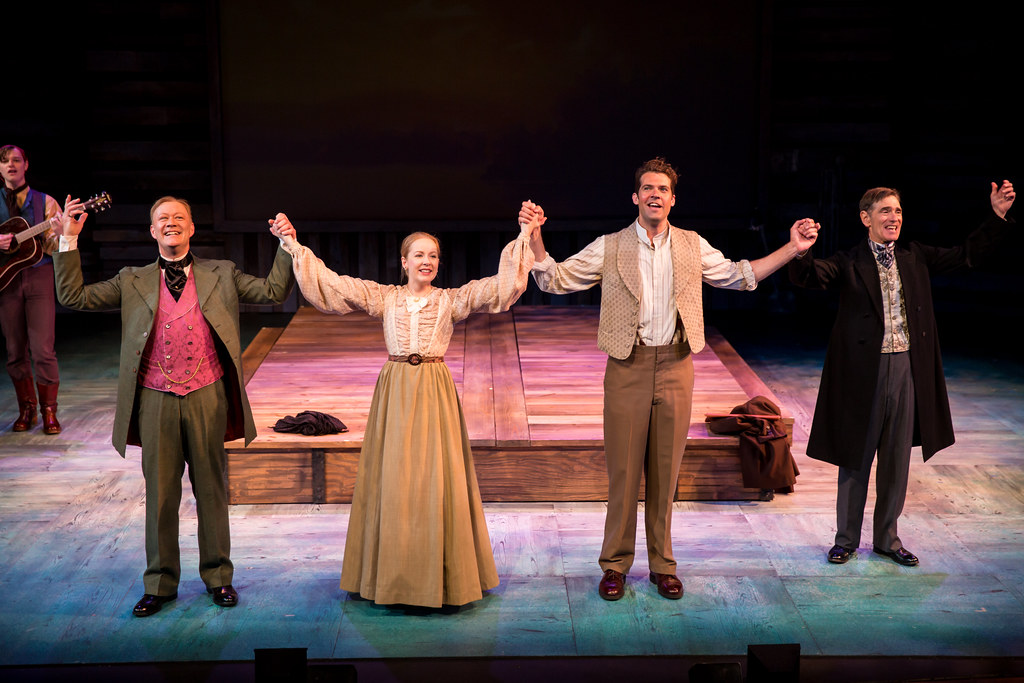